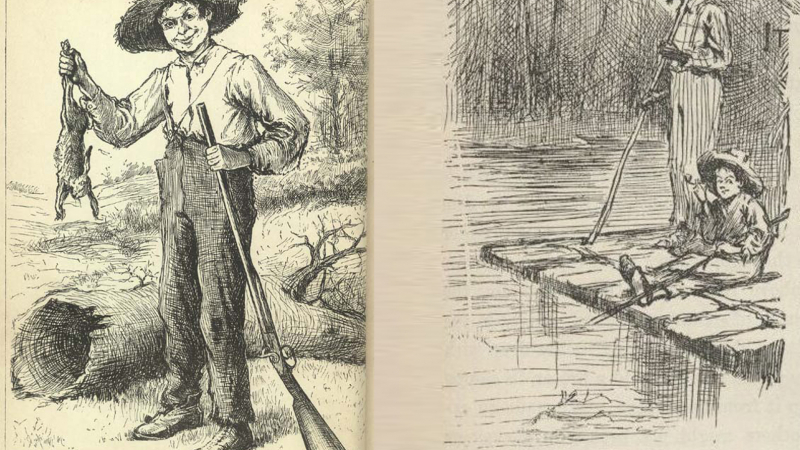 Part of my summer reading this year is Mark Twain’s Huckleberry Finn. Huck tugs at my heart more each time I read the book. He and his friend Tom Sawyer have some money in the bank, but there are so many other things Huck deserves but doesn’t have. He has his friend Tom who matters to him a lot, and adults in town who try to be a good influence. But he has no family support. His father, who is not addressing his own problems from addiction, trauma, and grief, physically and emotionally abuses Huck. Huck decides to run away from his family situation, and embarks on a journey with, of all people, an enslaved person named Jim, who is trying to re-unite with his family. The raft becomes their home-away-from-home on the Mississippi, and Jim makes the raft a safe haven for them both. For the first time in his life, Huck begins to have some of his basic material and emotional needs met, and Jim, a husband and father who longs for his family, is the perfect person to provide those needs for now. Then Huck starts to grow up in healthy ways, while still being the likable, talented and funny person he was before.

Huck’s first need that gets restored, that is the most basic to young teens of all times and cultures, is his need for connection and belonging. It’s accepted that babies and toddlers need connection and belonging, but throughout life, people never outgrow the need to know that there is someone close to them who is available, responsive, and empathic. Jim listens with intense interest to Huck’s story of escape, and cautiously decides to open up and share his own story. Jim shares what wisdom he knows with Huck, who listens, although he knows that most of Jim’s advice is just superstition. Huck plays a trick on Jim by pretending to be dead, and then showing up alive again. Jim hugged Huck, rejoicing that he was indeed alive. But when Jim realized that he had been tricked, he said he was ashamed of Huck, because good friends shouldn’t play cruel tricks on each other. Huck apologized, because he valued the relationship with Jim enough to be humble. Huck was beginning to develop a sense of personal responsibility, when he saw that his words and actions affected Jim deeply.

Huck, like all young teens, needed to learn to work productively with his hands, his body, and his mind, and to have his work be appreciated. Huck fished and hunted for their sustenance, and while he already knew how to do those things, no one had shown appreciation before. Now he and Jim were a team, with Jim cooking what Huck caught, and then they enjoyed their meals together. In his mealtime conversations with Jim, Huck started to make sense out of the education he had received so far. He had a long way to go, especially in History (if they had had Wikipedia back then, Huck could have looked up the difference between “The Dauphin” and “the dolphin”). It’s a funny scene, and relatable because we have all struggled in some academic subject, and we need to succeed academically to get access to opportunities. Good conversation is good exercise for the mind, and helps us to organize facts and patterns, and to succeed academically. Huck also became an expert on rafting, which in that time period would have been a useful career skill. Practical life skills seem to be undervalued for young teens today, just as sports were undervalued in Huck’s time. Just as we now know that sports are a great way to build personal discipline and to develop physically, socially, mentally, and emotionally, it should also be remembered that practical life skills do all of those things, too. Every young teen’s life needs to have some room in it for learning practical life skills. Cooking and meal planning, animal care, plant care, environmental stewardship, bookkeeping and budgeting, household chores, metal work, wood work, sewing and knitting are just a few examples of practical life skills that young teens should receive the support to learn. The fruits of their labor should be celebrated and rewarded.

Every young teen needs to know what his or her family believes in, and what they stand for. They need an ethical framework beyond simple good vs. evil and us vs. them comparisons. They need to learn that in a diverse world, a person’s full humanity is revealed through relationships. Huck used to think of Jim as someone to make fun of from a distance. But after they spent some time depending on each other and talking about things that matter to them, they value each other. Family and close friends are usually the best people to learn from, but sometimes traveling far from home and doing something completely different can help a young person to decide what they value most. Huck faces real-life ethical dilemmas on his journey. He talks with Jim about the true meaning behind stories such as the Biblical King Solomon and Baby story. Huck’s odyssey changes him from a tough kid who would automatically tell a lie to get out of a tough situation into a young man who learns to tell the truth. The religious talk he heard in church, and from the Widow Douglas, now has application in the real world.

Every young teen needs at least one opportunity to act on their personal beliefs. When Huck decides to double-cross the swindlers who are pretending to be royalty, he shows that he no longer believes in opportunism, but in fairness, and that he wants to be a part of making the world a more fair and just place. His heart breaks when he and Jim become separated, and Jim is sold back into slavery. Huck wrestles deeply with issues of personal freedom and human dignity, and resolves to take huge risks to restore both for Jim. This is the age of religious coming of age as well. It is interesting to imagine Huck’s peers back in Hannibal taking religious instruction towards baptism, confirmation and bar/bat mitzvah, while Huck comes of age spiritually through his response to Jim’s recapture. The opportunity to act on personal beliefs could come in the form of a tragedy or crisis, through religion and other wisdom traditions, or a discipline such as a vegan diet, environmental stewardship, or volunteering. Each young teen should decide for themselves what belief is important enough to act upon.

Huck left his home town as a runaway boy and emerged as a young man with a bright future ahead of him that was better than money in the bank could provide. His journey with Jim made him someone who creates a better future for those around him and makes the world a better place.